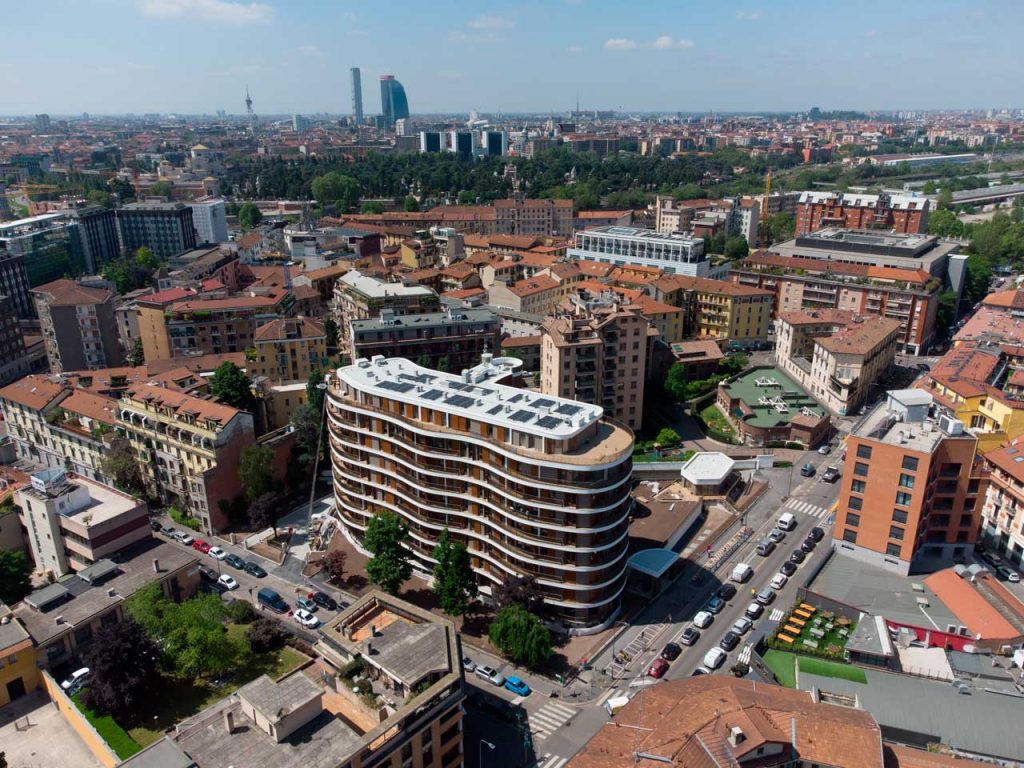 In the new project at 10 Via Alserio, Milan, Asti Architetti starts by changing the use classification of the building, from offices to residences, to begin redevelopment and enhancement of the entire block, to create a new building with organic, fluid forms featuring 70 large apartments overlooking terraces. The original structure of the building, designed by Melchiorre Bega in 1968, has been preserved along with its curved fronts emphasised by the presence of large full-height openings, for which natural-effect materials and wood panelling have been used.

Melchiorre Bega designed the building at 10 Via Alserio in 1968 to be used as offices: a seven-storey high, narrow and slightly curved building, disused since 2015, with meeting rooms, warehouses and a garage inside. Paolo Asti (founder of Asti Architetti) has focused his action on the aesthetic transformation of the architecture into a residential building, and designed façades with soft, fluid lines in which the outdoor spaces that characterize the new frontsaccentuate the curved lines and add lightness to the building body in a rhythmic sequence of solids and voids: a project that integrates and moulds its form within the surrounding context, just like the over 70 projects in the city carried out in just 17 years of activity. 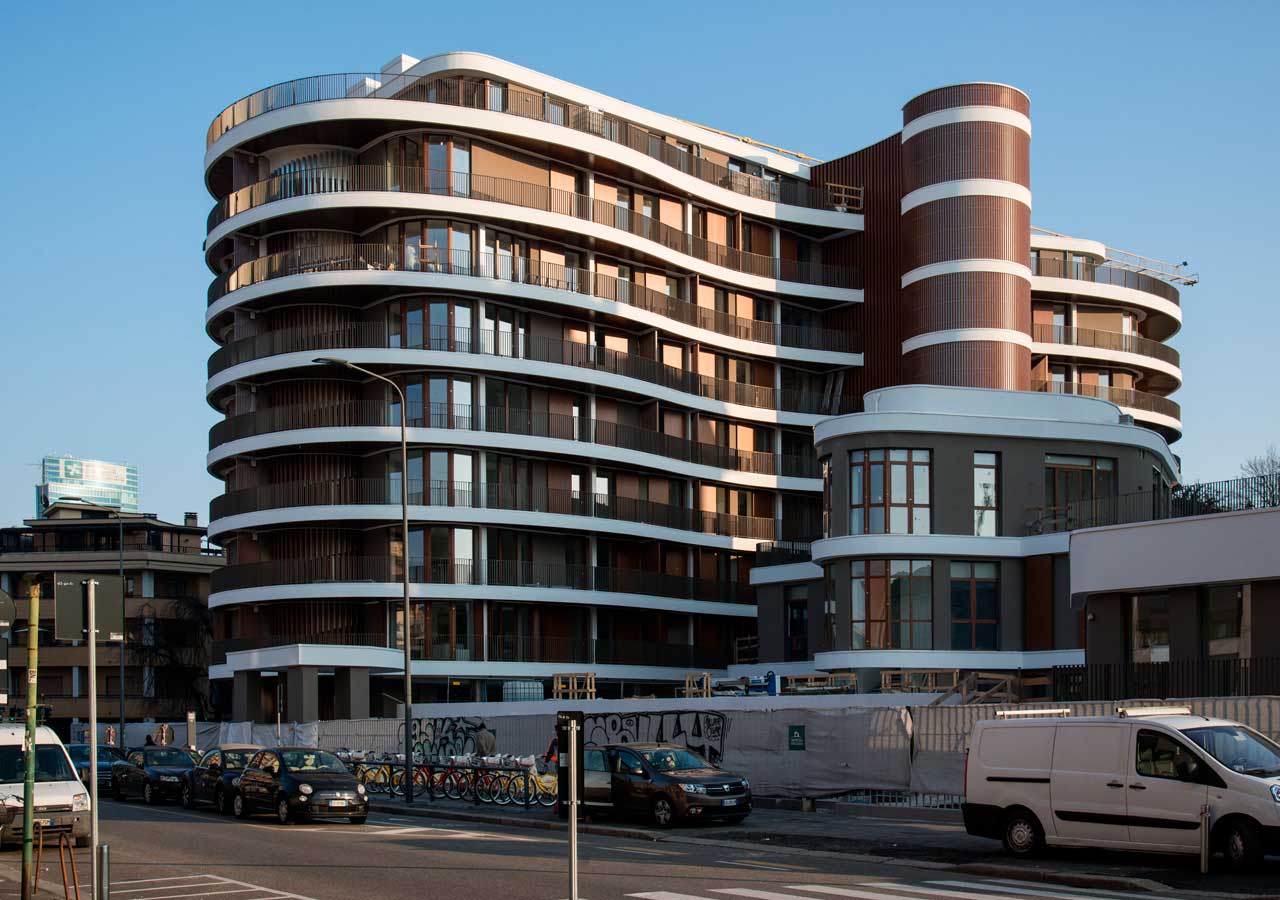 “Being able to transform Milan, the city where I was born, into sections, in an attempt to improve it, has always been the driving force behind my work as an architect, and the design project for the Via Alserio building, which is comparable to an entire city block in terms of size and location, has been a special challenge. Apart from the usual technical and compositional skills, I had to add a strong dose of humanity to convey to the façades that sense of peace, protection, beauty and balance that one’s home should have… even before crossing the threshold. To achieve this ambitious dream, I made full use of the tools of my trade: terraces, greenery, interplay of light and volume, alternation of noble materials, distributional balance. This was done in the belief that a skilful mix of these elements would create a building consisting of public parts ( façades) and private ones (interiors and gardens) parts, which would both play a significant role for the city and be a nest for individuals.”Paolo Asti tells us.

The concept of the project for the plot on the corner of Via Alserio and Via Cola Montano in the Isola district originated from the conversion of the existing building which was intended for commercial use, and whose perimeter and load-bearing structure remained unchanged.

The main building facing Via Cola Montano rises nine storeys above ground and is connected via the central stairwell to a three-storey high building body; both were intended for office use. The isolated building to the west, on Via Alserio, consists of one floor above ground and was intended as the residence of the caretaker.

The building retains its original layout, i.e. the outline is left unchanged, although a structure for balconies has been added on the floors from the first floor to the roof of the highest main building. Also the existing stairwells serving the different floors, which are the main design elements of the existing façade, were not changed in the restyling operation. Whereas, the internal surface area was then redistributed according to the change of use from office to residential use. 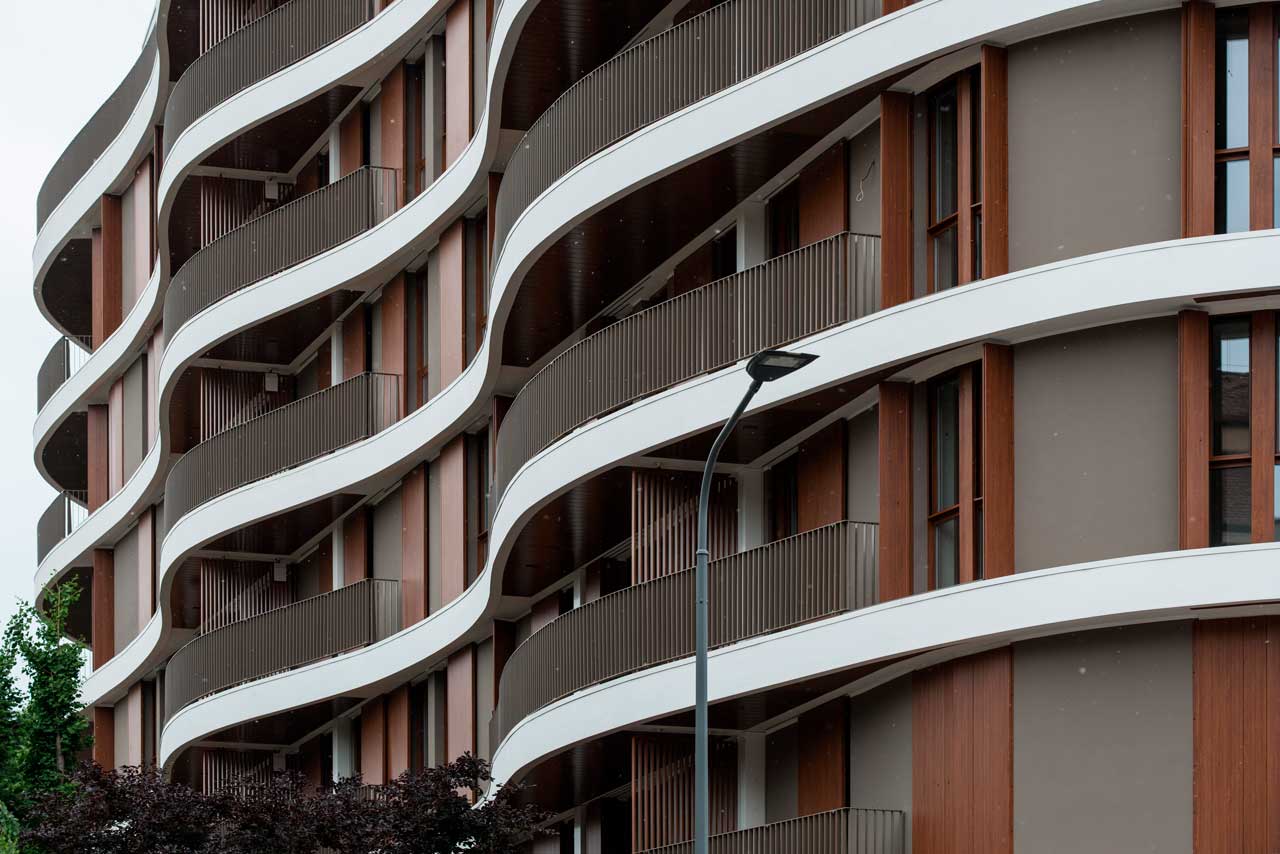 The original main façade of the tallest part of the building openly revealed its use as offices, as it presented a serial sequence of glass surfaces marked by the pilasters and pilaster strips of the staircase bodies, inserted in a regular mesh that emphasized the vertical layout of the building. Whereas the lower building bodies, both office and residential ones, show a horizontal façade layout thanks to the use of ribbon windows. Thus, compact and simple, with a typical office matrix, the façade has been entirely renovated through the introduction of a few structural elements, the terraces, but with a significant constructive and decorative effect.

“The work carried out on the façade of the building is an architectural cosmetic operation,whose aim is to transform the typical repetitiveness and rigidity of the office function into the irregularity and ‘softness’ typical of residential use. The sequence of openings, based on the internal distribution of the residential layout, has become less dense and uneven in order to interrupt the static effect of the façade. The system of pillars on the ground floor of the existing façade, rising from the ground floor to the roof, is intersected by the balcony frames.” Paolo Asti explains.

Together with the new windows and doors and the energy-efficient roofing, Asti Architetti has created a truly residential system. The reference to the rounded lines in the plan of the original building has become the leitmotif of the new residential building thanks to the use of curved terraces throughout.The new façades have been designed to significantly improve the building’s energy performance by ensuring high thermal and acoustic insulation.

The lower body and the separate ‘caretaker’s house’ have also been renovated with the same design elements as the main façade.The façade with ribbon windows has been effectively expanded with large glazed areas and wooden panelling.

In all sections of the building, the balconies have parapets made of iron rods, while the stringcourses are marked by white sheet metal casings in the same colour as the stairwells.The reference colours are various shades of grey, white and wood in order to make the property look stylish and heterogeneous.

The study of the composition of the interior spaces has favoured spacious flats that are pleasant to live in and have terraces. The choice of materials reflects the residence’s strong personality and its close relationship with nature, which is expressed in the natural-effect floors, ceilings and wall cladding. On the ground floor of the residence, a series of ancillary spaces have been designed, starting with the lobby, which includes a reception area and a delivery space dedicated to the storage of the condominiums’ purchases, including cabinets accessible through badges. Several multifunctional areas, playgrounds, coworking and wellness areas (fitness area) have also been created, as well as an attractive green area, designed in detail and enriched with various types of trees and arboreal essences.

Therefore, after 40 years, the Bega office building has come back to life thanks to the Alserio10 residential complex designed by architect Paolo Asti, a redevelopment that follows the profound transformation underway in the Isola district, which is part of the Porta Nuova project.
Scheda tecnica